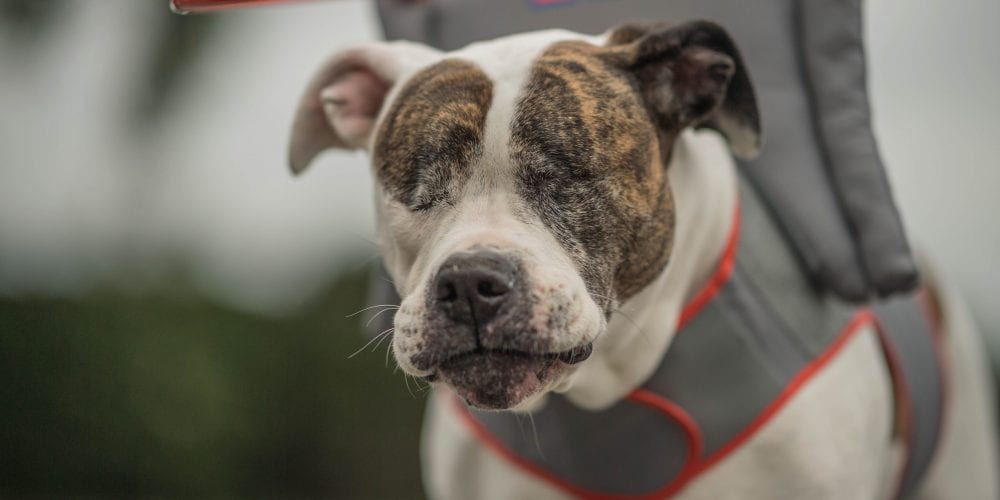 A brave dog has shown real “bulldog spirit” and battled back after losing both her eyes.

Tiggi, the rescue American bulldog, fell victim to a genetic condition which caused her tear glands to die but thanks to her loving owners and the expert help of her vet she is adjusting to a new pain-free life without sight.

The 10-year-old dog was diagnosed with an extremely severe and painful case of Kerato-Conjuntivitis Sicca (KCS) or dry eye in the summer of last year. 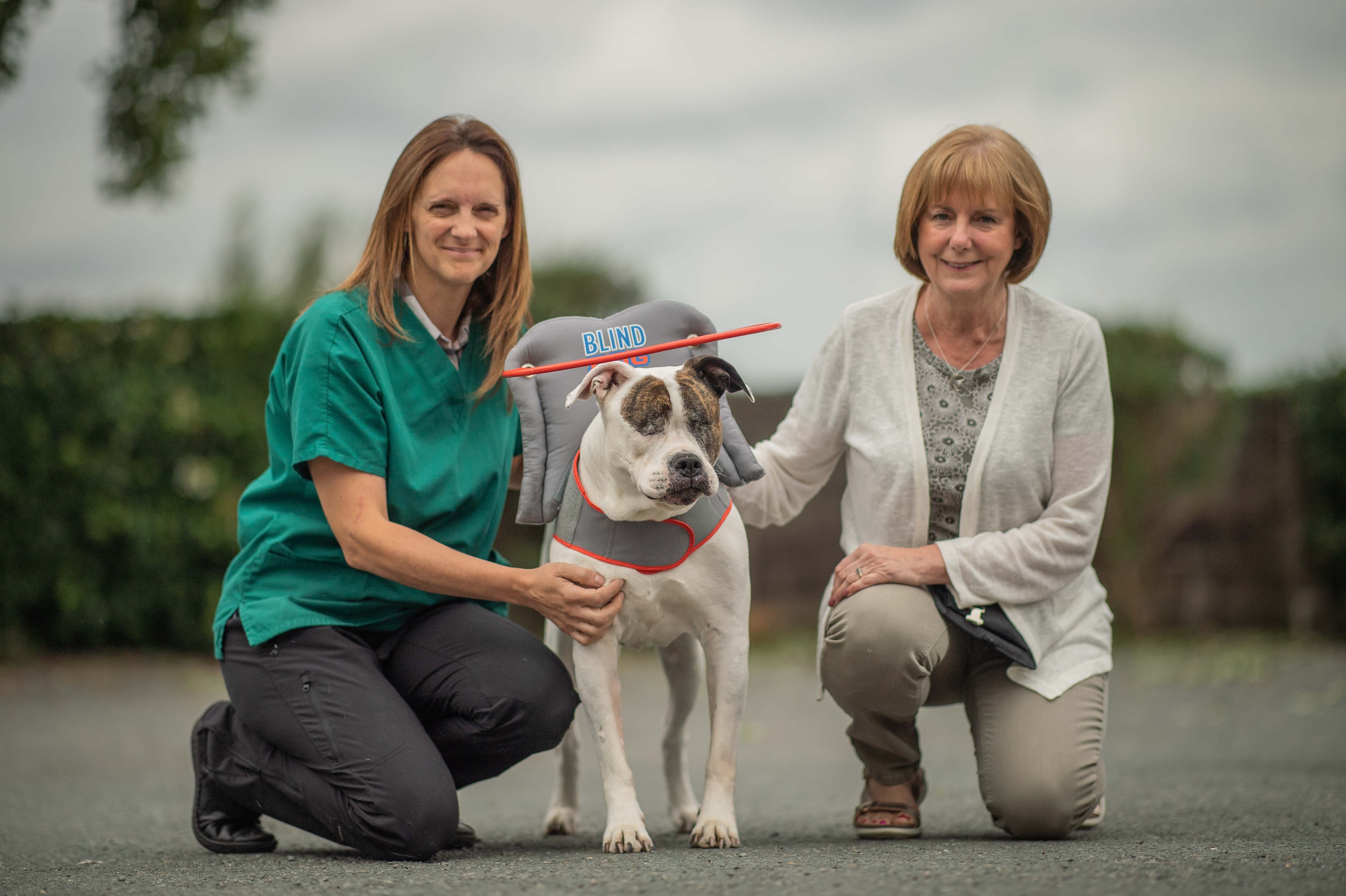 Despite the dedicated efforts of Tiggi’s owner Lindsay Webb, her family and the help of Head Vet Rachel Dean and her team at Lymm Veterinary Surgery, the condition became so painful that their only option was to remove her eyes.

After the operation, ‘Team Tiggi’ turned their attention to helping her adjust to life as a blind dog and the chatty, happy dog they all knew has returned.

Lindsay, 62, a retired dental hygienist from Lymm, said: “I really feel like we have turned a corner and our happy dog has returned. She is chatting to us again, seems more relaxed and I am 110 per cent sure we have done the right thing for her. I have no regrets at all about removing her eyes and making her life a comfortable, pain-free one again.

“She was in so much pain at one point that my daughter Alex and I decided that letting her go was probably going to be the best thing.

“But when the time came to do it, we had a real heart to heart with vet Rachel and her colleague Geraldine and we jointly decided that it was worth a try to remove the eyes and see how things went.

“Removing the eyes was removing the pain and even if the worst thing happened and she didn’t adjust and she still had to be put down, then at least she wouldn’t have been in pain when it happened.”

Head Vet Rachel Dean of Lymm Veterinary Surgery on Booth’s Hill Road, explained the lengths they had all gone to in an effort to save Tiggi’s sight.

The surgery is part of Willows Veterinary Group which offers a wealth of knowledge and expertise through a network of 25 small animal practices, a referral veterinary hospital, two equine centres and a seven-office farm practice, located across Cheshire and into Greater Manchester, North Wales, the Wirral and Staffordshire.

Rachel said: “Tiggi first came to us with sore eyes in July last year and after some initial treatment, her eyes didn’t improve and she was clearly very uncomfortable.

“We can do a test to measure the levels of tears a dog is producing and when we did this, Tiggi’s result was extremely low and at times when we tested it, it was zero, so we diagnosed her with a condition known as dry eye.”

Rachel referred Tiggi to an eye specialist and in a bid to restimulate the tear glands and protect her eyes from any further damage, a complex drop regime was embarked on.

At its peak Lindsay was administering six different types of drops 12 times a day. Tiggi was also on oral painkillers daily to help her manage the pain associated with the condition.

When this didn’t get the results hoped for, operations were carried out to reroute salivary glands from within Tiggi’s cheek to her eyes – effectively using her body’s saliva to lubricate her eyes.

Both operations went successfully and Tiggi’s eyes started to improve but one of the side effects eventually became too great to manage.

Rachel said: “The problem with rerouting the saliva gland is that saliva contains calcium which can be damaging to the eye when it builds up on the cornea.

“We give special eye drops to help reduce the calcium crystals from forming on the cornea but unfortunately for Tiggi, she became oversensitive to these drops which meant they could no longer be administered and she then ended up with severe ulcers and infections in both eyes.”

No longer able to help manage the pain Tiggi was experiencing, Lindsay and Rachel decided together to remove her eyes and help her adjust to life without her sight. 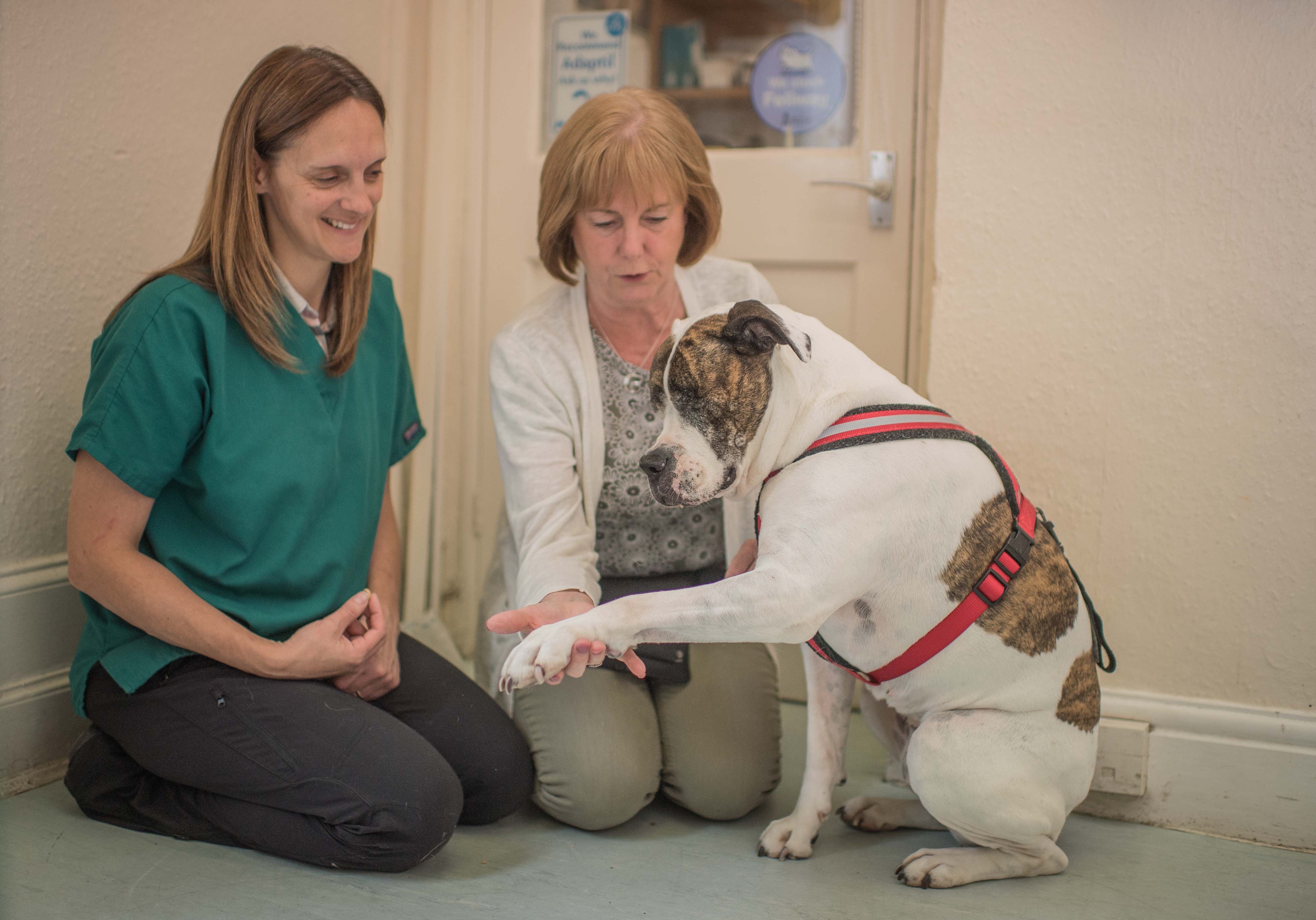 Rachel, who has worked in the profession for more than 20 years, said it has been an emotional experience for her and her team but that they are all thrilled to see Tiggi now making such excellent progress as a blind dog.

She said: “I am so happy for Tiggi and Lindsay that we decided to give her this one last chance and that things are working out so well.

“Every time we see Tiggi now, her spirits are brighter. We can all feel sad about her not being able to see anymore but I really don’t think Tiggi is as bothered as we think. She’s shown a real bulldog spirit.

“A large part of the sensory input for a dog is from their sense of smell so actually if they lose their hearing or sight, then they are still able to adjust relatively well and Tiggi is a fantastic example of this.

“We were all under no illusion that her adjustment would be challenging but knowing Tiggi like we do and knowing how completely dedicated Lindsay and Alex are to her care, we really thought it was a viable option and I am so pleased to see we have all been proven right.”

Lindsay has implemented a new training regime and made inventive changes at home to ensure Tiggi’s adjustment to life as a blind dog is as easy as possible.

She said: “She is rehabilitating remarkably well.

“We have had to retrain her using voice commands now because before we used to use a lot of hand signals. I am still teaching her left and right but she already understands, ‘careful’, ‘stop’, ‘wait’ ‘step up and step down’.

“We have bought her a dog halo, specially for blind dogs, which helps prevent them bumping in to things and it has been very useful for helping her map out the house. I also use different aromatherapy oils to help her sense where she is.

“She has lavender by her bed and jasmine by the back door, geranium in the living room and ylang ylang by the front door.

“We wear cat bells round our ankles so she knows where we are, can hear us moving around and doesn’t feel alone and I have a different bell for our walks together.”

For Tiggi and her team of supporters, their journey together to this point has been a challenging one.

The plucky canine had a terrible start in life before she found her dedicated owner Lindsay Webb and her family.

The exact details of her early plight are unknown but it is thought she was cooped up in a small flat, barely seeing the outside world, and at some point had suffered physical abuse which had made her fearful and aggressive.

Lindsay said: “When we got Tiggi, we had to work very hard with her for many years to deal with her aggression. We walked her for four years on a muzzle because if she got into a situation where she felt fearful, then she would lunge violently. It would take two of us to walk her initially and she was particularly aggressive towards balding, middle aged men, people in hoodies and other dogs.

“But she never showed any aggression whatsoever to me or any of the family. Quite the opposite and she forged an extremely strong bond with Alex who was going through a difficult time in her life at the time. They both needed each other and they both did each other good. 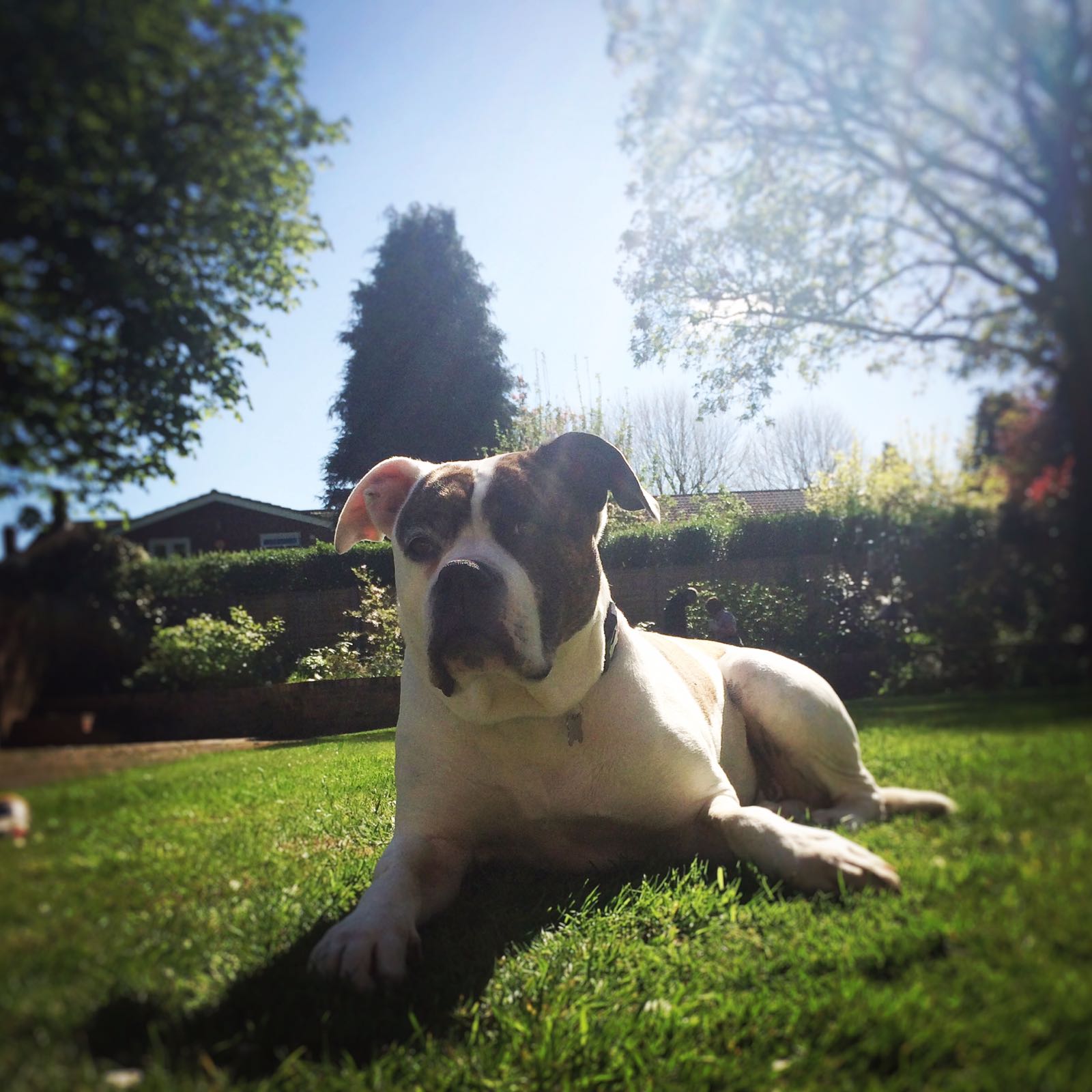 “She was a very easy dog to fall in love with and there was no question that we would ever have given up on her.”

Lindsay added: “I cannot speak highly enough of Rachel and her team at Lymm Veterinary Surgery who have gone above and beyond to help us care for Tiggi.

“We’ve had such support from them – a real ‘Team Tiggi’ effort to help her through everything.

“Two of the veterinary nurses, Gina and Ellis, even used to come and help us walk Tiggi in the days when we working through her behavior issues.

“Rachel has always gone out of her way to make sure we have had access to the best possible advice with Tiggi and all her problems, from the issues with her eyes, to the arthritis she has and the fact she has a very reactive physiology so she is allergic to all sorts.

“With her latest eye problems, Rachel made sure we were referred to a first class specialist and has been helping us ensure she makes a good adjustment to life as a blind dog – even calling us up at various times to see how things are going. I can’t thank them enough.”